Some of the most popular questions people have for me after they join my newsletter are:

How do I attract more customers to my store?

How do I increase my sales?

How can I sell more?

I get it. Even before the pandemic, traffic to stores and malls was down, and while you might be tempted to haul out that old losers limp They’re all buying online, don’t.

The fact is 85% of the shopping that is to be done for the foreseeable future according to McKinsey will be in brick and mortar stores.

According to TimeTrade, as much as mobile shopping is hyped, the reality is mobile purchasing is slow to grow; only 13% of respondents have previously made a purchase using a mobile device.

So if the endless aisles of online aren’t the culprit to lower store sales, what is?

The traits and skills necessary to engage shoppers, to get them to buy today and to tell their friends about their wonderful experience are largely missing throughout retail - from the highest luxury brands, to the biggest big boxes, all the way to the smallest boutiques.

We have to unpack the baggage of our lives if we are to be able to escape into the world of retail and our customers.

What does that mean?

Quite simply, most of us have been able to get away with some very bad personal habits in our own lives.

We listen to talk over someone.

We allow ourselves to be distracted while still expecting no one can tell.

We sympathize when we need to empathize.

Here are the 3 traits you need to adopt and use if you are trying to attract and keep your customers:

Concentrating On The Why

We are a distracted group balancing multiple sources of information - and none of it too well.

That plays out on your sales floor when employees only half-concentrate on your shoppers.

When they only half-understand why they are there.

That results in only half-hearted engagement...and shoppers leave.

Actress Katherine Hepburn noted that Spencer Tracy had the ability to tune out the audience or the crew to concentrate just on the person speaking to him. It is what made audiences connect with him.

When we don’t concentrate on the shopper for more than a few seconds, we only grasp a snippet of what they say and based on that, we react.

Consider a couple who walks into an independent nursery looking for something to plant. They ask an employee what type of palm tree they can put by their pool. The salesclerk blurts, “You can’t put a palm tree by a pool. They are just too dirty!”

“Then what can we plant?”

“Pool plants over there.” He points, turns and leaves to return to the counter.

The wife thinks, That was rude and he doesn’t know any more than we do. Ten seconds later they’re in their car headed for the big-box.

Since he didn’t concentrate on his shopper to determine why they wanted the tree, he didn’t understand that they didn’t necessarily want a palm tree; what they wanted was a tall accent tree for their pool.

A great salesperson, one who is interested in meeting another human being first and selling the widget second, develops their concentration skills so that the only person they are interested in at any given moment is the person in right front of them.

When you develop the skill of concentration, you ask yourself when looking at a new customer…

Of all the days in their life, why today are they walking in to this store?

To answer that question, you concentrate on the shopper to learn more than their first words might say.

You can understand that shopper’s gift might be to receive someone else’s forgiveness, or their purchase is to reward themselves, or in the tree story, to find a final addition to the dream backyard they are creating for their friends and family.

When you can concentrate on their reason for being in your store, you can develop the next trait...

Listening For The What

Being able to listen is related to concentrating – but adds the what, not just the why. 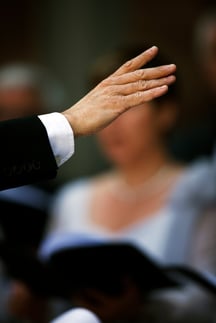 When I first started working on my choral-conducting, my professor Rod Eichenberger, would stop me mid-phrase and ask, “Are you getting the sound you want?”

“I dunno” I replied. I was so concentrated on why my hands had to move in a certain way that I failed to connect my actions to what I was hearing from the chorus.

Notice, he whispered in my ear... and I restarted.

Noticing is listening. It’s what tells another human being they are worthy of your interest.

When we don’t feel listened to, we shut down.

How we hear someone is falling on deaf ears as we text, emoji, and gif our communication skills.

But if you want to be a professional, a salesperson who enjoys their job and the fun of selling, you must standout from those who are awash in a world of words they fail to hear.

I came face-to-face with such an unlistening person behind a counter at a deli...but it could have been anywhere.

When she asked what I wanted, I said “A six-inch chicken sub on white with green peppers.”

She put on her gloves and asked, “Was that white or wheat?”

“And what did you want?”

“A chicken sub with green peppers.”

“Did you want cheese?”

“You don’t want me to warm it up first?”

“Well you said something about it being cold.”

“What are you talking about? I never mentioned anything about cold.” As I looked down, she was preparing a twelve-inch sub. “Uh, that’s supposed to be a six-inch.”

“Then you are in the wrong business,” I said.

But the point is there are millions of employees working in retail who are only half-hearing what people are saying.

That means they’re only half-understanding what their shopper is trying to solve.

That translates into only half-caring about what that shopper wants.

And probably only half-caring that they work at your store.

No wonder so many shoppers feel disconnected when they go shopping in a brick and mortar store...the one place their money should be making people listen to them.

So how do you develop your employees’ listening skills?

A fun exercise to use in a meeting is to select a true story you have experienced with a shopper. Write it out so you make sure you get all you want into the story. Give as much detail as possible but don’t make it so straightforward; include some irrelevant details about the weather, or you getting to work on time, or the trash overflowing - doesn’t matter.

Give your employees pads of paper and pens. Tell your story. (If you really want to test them, leave out one or two sentences.) At the end, ask them to write down three relevant details you mentioned in the story. Ask them to identify two things that had nothing to do with the story. Ask them if there are things they feel were left out.

It isn’t important that they get this perfect; it is simply a lesson in listening.

There are those on your crew who deliberately take the time to listen and they became the managers and key staff that allow you to operate the store successfully.

There are also those who didn't listen and they became the problem employees, and they were let go, or left of their own volition rather quickly.

Empathy is the ability to imagine all the sensations of another person. You want to feel what they feel.

Maybe a shopper is frustrated an old favorite jacket has worn out. Because you can empathize with how that would feel and use all of your knowledge about the products in your store, you hold the solution.

Maybe they have been searching online for a purchase,  but something has been holding them back. When you have empathy, you understand that you have the wisdom to sort the options and solve their problems.

Untrained salesclerks might only sympathize with how awful it is something wore out. In their world, yea it sucks is something they identify with. And that’s the end of it.

Because they can’t empathize and feel what that shopper feels, they can’t help the customer move past and solve that problem. Both the clerk and the shopper are stuck.

How do you develop your empathy?

You cultivate your curiosity about strangers. Studs Terkel once said, Don’t be an examiner, be an interested inquirer.

To develop empathy, you have to give up the idea that as a salesperson, you're in charge. The truth is your shopper is.

And to attract and keep more buyers, you have to make sure you aren’t treating them like they are felons who did something wrong, or like they’re third graders needing to be prodded for every piece of information.

To develop empathy, rather than just asking what are you looking for, ask questions that help you understand the frustrations, excitement, or perspective of the shopper standing in front of you. Then concentrate your listening on what they say.

The problem isn’t how do I get more shoppers into my store?

And it isn’t how to turn them into buyers…

If each person on your team will concentrate, listen and have empathy for each person who walks through your doors, it will happen because...

Shoppers are human beings looking for a friendly face...

Someone who can concentrate on their needs at that moment.

Someone who can listen to the emotion behind the purchase.

Someone who can empathize and provide the solution just right for them.

When you develop the ability to concentrate, listen, and empathize, you’ll be in the moment...

And customers will tell their friends you did.

How to Greet Customers in Retail Stores