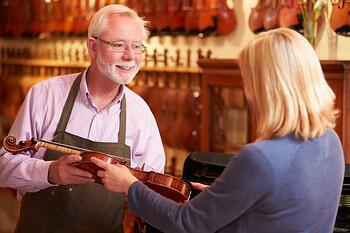 Many decades ago, when I was first starting out as a commissioned salesman, I had a very good customer, who went by the name of Richie.

Richie would flirt with buying expensive items.  He’d casually ask about something new. He’d act disinterested one time then try it on another time. On a different day, he would spend time examining an item but feigning he wasn’t really interested.

Eventually, he would buy the expensive item from me, and often it made my sales quota. I liked when that happened. And for that reason, I always strove to spend as much time as he needed each visit.

Unfortunately, he didn’t always come in when the store was empty; when I could give him exclusive one-on-one service.

That meant I had to juggle his need for service with the demands of a busy Saturday and a store full of shoppers. I sped from one customer to another.

Your speed of service has to increase with an increase in shoppers.

But if you truly care about your customers, you still have to build rapport, open your heart to another human being and discover who they are before you launch into showing your merchandise.

So many salespeople get so wrapped up in their sales that they develop blinders to what is going on with other shoppers in the rest of the store. Then those other shoppers have to break in with their Excuse me’s.

You don’t want to make the shopper you have been helping feel rushed or dissed.

In order to keep this from happening, before you have to break away, make sure you occasionally look away from the customer and monitor the store traffic.

To prepare them for the chance you’ll need to leave and come back, always find a way to bring up how busy the store is in all your conversations.

That sets the expectation you’ll have to help more than just one person.

Here are three tips on how to get away from a shopper in your store and onto another with a bit of grace.

1. Give an honest reason and summarize your interaction so far. You could say, “I have to go greet those customers over there. I hope that’s okay. (Wait for their response which 99% will be to go ahead.) Before I go though, just to recap…” The goal is to let the shopper know that they have been heard by verbally confirming what has been said. People who feel heard are more patient and forgiving. After you’ve paraphrased your interaction so far, you’ll hear the customer say, “Yes.”

2. Give them something to do while you’re away. This is easy with apparel because they can try on another size, color, or additional item. When you understand you need to keep their minds busy so they don’t look at the clock, you can be creative. With other products like furniture, have them find a picture of the room the couch is supposed to go in on their smartphone. For a new TV, have them send a picture from their phone of their kids over your wi-fi to the screen. You get the idea.

3. Introduce them to another salesperson. Often the best salespeople will be in more demand. If that’s you, similar to number two above, make sure you restate where you are in the sales process to the other salesperson and what the customer is looking to solve today. Introduce the new salesperson to the shopper by name. That way the shopper will usually offer theirs and they continue the communication human-to-human.

When you return to the shopper to pick up where you left off, first thank them for their patience. Next recap where you left them, and then get them to talk about what they’ve been doing since you left.

Most reasonable shoppers understand your store does not offer one-on-one customer service and will understand. Those who don’t, well you can’t please everyone.

And yes, there are some people who are energy vampires who just want to talk without buying a thing.

That’s as true about shoppers as it is about retail salespeople. The walking wounded some call them.  In the case of a shopper, when you realize that might be the case, stop asking questions such as which would you prefer? How did that happen?

Instead, switch to declarative statements about the product in question and add an action. Try this on, or walk over there, or feel how light this is. And when you’re convinced they are the walking wounded, use the tips above to move on to another shopper.

Finally, if you are the floor supervisor, you have to be scanning to see if you have to rescue a salesperson who is ignoring the signs they should help more than one person.  And you should be using retail sales training to bring them up to speed.

Do we ever really want to leave a customer?

Because you risk making the customer feel rejected and lose the sale.

But in this day of budget-scheduling, it is more likely than not that your salespeople will have to cover several departments and wait on more than one customer at a time.

That goes for luxury brands as well.

I’ve seen professional salespeople serve multiple shoppers at once, both entertaining and making each shopper feel valued. It isn’t easy to do but that skill really comes in handy during a rush.

Richie confided to me one day after a rush that he had terminal cancer so advanced that his life insurance company called him up to tell him they could just pay the policy out to him because he had so few weeks to live.

Richie always appreciated my time to listen to his stories and make him feel special. And while I had to leave and return to him many times when he came to my store, my crew and I were his only real family. Even though it is now more than 30 years later, I still miss his grin and stories.

Our relationship wasn’t fake. It wasn’t a joke. It was real.

And that’s my final point, you don’t leave a shopper without first opening your own heart to them.

Forget that point and you’re rude, uncaring, and more than likely, hurting for sales.