How to get serious about your retail customer service and engagement 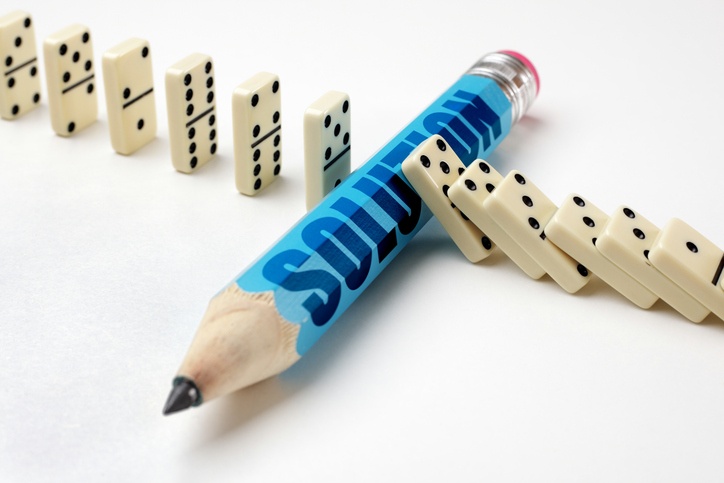 Brick and mortar stores have the ability to surprise and delight. So does a downtown shopping area.

The sheer serendipity of walking into a store can present you with random points of view. Couple that with a retail crew trained in the soft skills of knowing your customer and how to engage a stranger and you’ve created an engaging shopping experience.

And that’s true for both online and brick and mortar retailers, right? So what’s online’s Achilles heel?

People only buy what they came to the site to buy, and if you’re an apparel retailer, half of them will be returned.

Maybe that’s because Artificial Intelligence (AI) is only going to show them a slew of things they are expecting to see. There’s no serendipity...

And serendipity leads to higher sales.

The question is, when does this become the tipping point where shoppers return to physical stores?

Humans love the random discovery of something new or unexpected. No algorithm can predict what that item will be or when you personally will be ready for it.

But that doesn’t stop them from trying.

Customer engagement is a connection between a retail sales associate as a representative of the brand and a potential customer.

How you manage that retail customer service interaction makes all the difference.

Many pundits are touting how to really engage shoppers; we are to bring all of the resources of Big Data to brick and mortar retailers.

Further, will the salesperson who knows your browsing history charge you more like online retailers?

Right now online shoppers have the blind belief online retailers are on their side and brick and mortar aren’t to be trusted for low prices. In fact, according to Selz, 72 percent of shoppers believe they will get a better deal online than in stores.

But that simply isn’t so...

Check out my recent price check of a vacuum cleaner on Amazon and the price fluctuations that one product has had over the past 30 days. 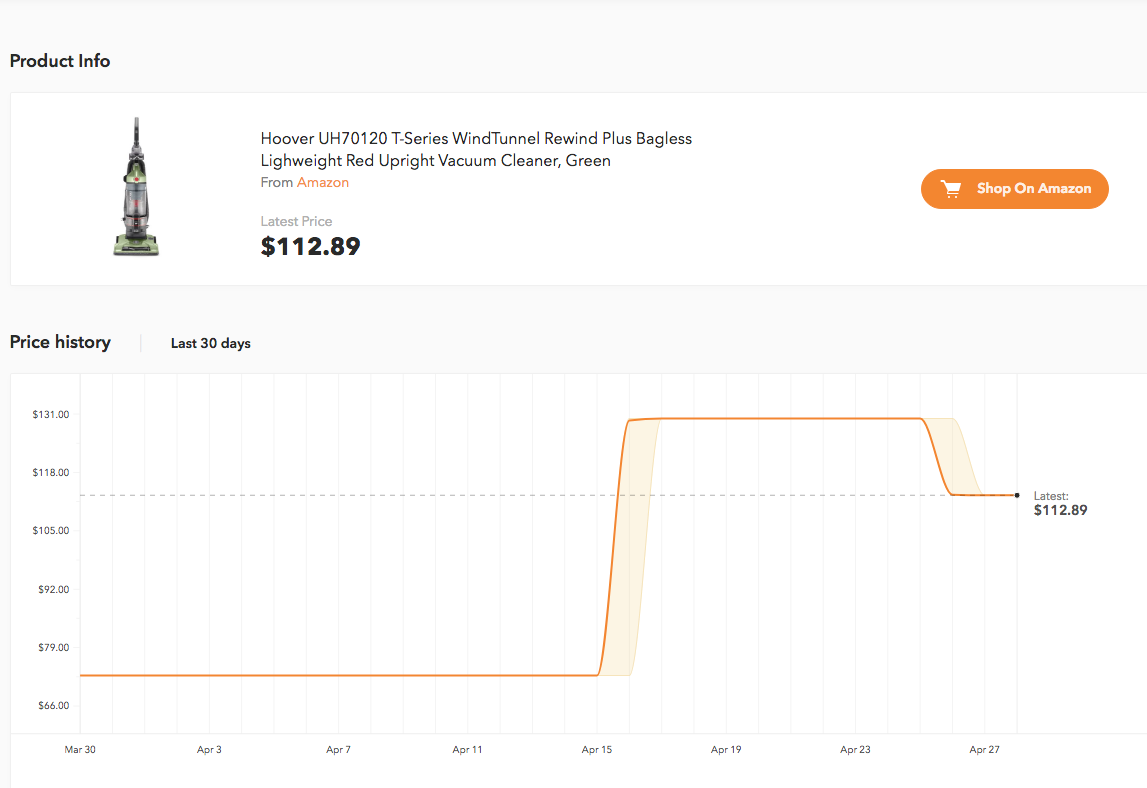 How do you compete with that?

Well first off-whenever someone states the online price is always lower - challenge them.

That said, you can’t feasibly change all your prices by week, or month, or hour nor can you charge more to the woman who drove a new BMW to your store versus the guy who rode a bike, but conceivably you could online.

Who has the time or the budget?

Oh right, online retailers have the technology that can do that in nanoseconds.

Your poor website hasn’t got a chance if you think you can compete on price.

And in-store, the less you train your crew, the more price-driven you will become. But because you aren’t adjusting prices in nanoseconds, you’ll probably be charging less than you should.

The less profits you make, the less you can reinvest in inventory, merchandising, training and even, yes, Big Data.

Retail is not dead, but brands are dying.

Scott Galloway from NYU Stern School of Business says, “Amazon has declared war — with the backing of 500 million consumers and a lot of cheap capital — on brands. And we will, using our algorithm, find you as good a product for a lesser price. Amazon will figure out in a nanosecond the best deal and most likely trade you into the highest-margin product for them which will be Amazon toothpaste."

You’d think engaging customers would be a priority in brick and mortar stores right now, right?

I remember strolling Michigan Avenue in Chicago one day. While most store employees couldn’t say a word to shoppers, there were a few who tried.

At Saks, I was greeted in the men’s designer department, “How may I be of service to you?”

I thought, Get away from me, it’s not the 1800s. Customer engagement is finding a new way to get strangers to talk to me.

At Under Armour I was asked just after I walked through their door, “So, what brought you in today?”

I thought, My feet.

Yes, they were trying. I mean, at least they were using their voices.

When I went into Macy’s, I saw they were also trying to engage their customers.

They had a DJ in the men’s shirt display unit – with no one around. 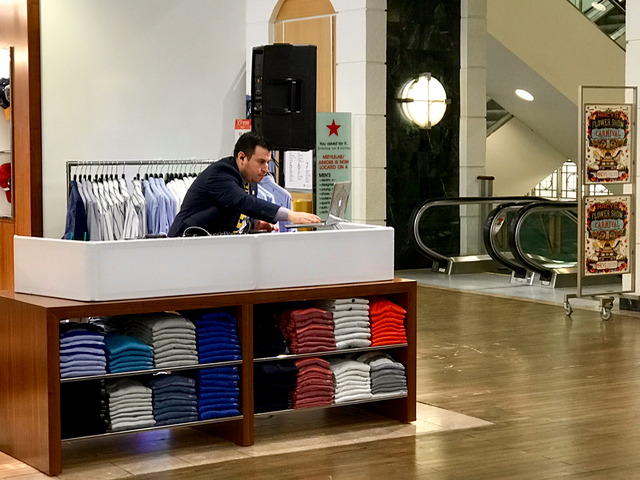 Meanwhile, I walked through all of their men’s departments and passed their leftover sale clothes, and no one approached me.

As an aside, one of my Facebook fans, Shawn Fitzpatrick, reported an experiment regarding in-store music. Their retail bicycle store stopped playing the music staff liked to listen to and swapped it for "feel good" music like Brown Eyed Girl, Sweet Caroline, and Friends in Low Places using an online music service. They reported a 40% increase in sales over the previous week. Seems there might be something to it.

Again, it’s all about customers' experiences, not what staff wants. Now back to my experience in Chicago...

While I was on the second floor of the Under Armour shop, a guy entered the golf simulator to swing a ball at a virtual course. 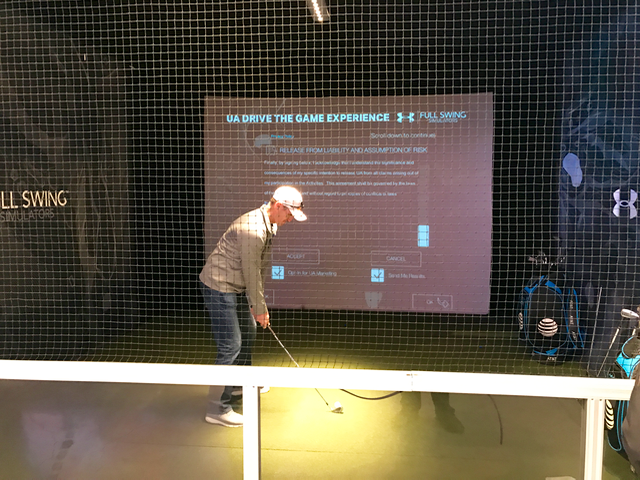 Alone, he tried to figure out how to use it. I watched for five minutes and he stayed alone.

That’s the best engagement those retailers could come up with?

Customer engagement helps people feel less alone. USA Today defined loneliness as “the feeling that arises when there is a gap between social interactions you want and reality.”

The most common complaint we still see in survey after survey of shopper pet peeves is “No one said a word to me, “Not enough employees to get waited on properly” or disengaged employees who do not want to serve anyone other than their phone.

That’s because we have an army of retail workers who have become mute.

That’s why you need to give your employees training so they get their own voices back. Once they do, they can become trusted advisors to shoppers.

Because online retailers are now beginning to use technology to try to get you to trust them.

The new Amazon Echo Look will now store pictures of you in your wardrobe and make recommendations for you. The app will provide an opinion based on criteria including fit, color, styling, and current fashion trends. All of the information being collected will also be used to help in providing future purchasing suggestions.

But it still doesn’t add the magic of serendipity.

And if brick and mortar retailers don’t use their advantage of unexpected purchases, what happens?

They’ll squander their one big advantage and profits will suffer.

So with all these examples, I have to ask you...

What is it going to take you to get serious about your own engagement of customers that leads to serendipitous sales?

Why should a shopper put more effort into shopping than you the merchant puts into creating a memorable – and by that I mean exceptional – experience?

They shouldn’t. But you should.

Read more about what shoppers search for: What Do Shoppers Value and Want When They Walk Into Retail Stores?

The way forward in retail will be a combination of stores and online to optimize the shopping experience and retain customers.

Scores of retailers are going to close – but it doesn’t have to be you.

You have to up your service game or you’re going to lose the game of retail. Retail sales training is still uncharted territory for many retailers.

They just don’t value putting money into the one physical thing that can most juice their sales - their employees.

Because of poor customer service and engagement in stores and online shopping’s endless aisles of products, shopping has been turned into just choosing things to use. Not new and different, but more of the same.

When the experience is as bland and boring as I had on Michigan Avenue, more and more shoppers will just let an algorithm choose.

And that’s a really sorry state of the future.

Take action. Hunker down. It’s going to be a bumpy ride.

Do what it takes now to get it done.

If you’re serious to compete in all of this chaos, let this post alert you to the real risks in retail right now. You have to focus on what the real problem is in your stores so you can fix them, rather than trying to treat the side effects.

I have a white paper that can help you, Bricks and Mortar Retailing at Risk in the Digital Age—From Silicon Valley to Main Street.

I call it my Manifesto because it sums up everything I believe is wrong with retail today (with some more figures to back it up), and how it can be fixed.

How to Find Strength In Being A Brick and Mortar Retail Store
Retail Customer Experience That Works: Connecting With Shoppers
Sales Training: Letting Customers Wait Will Cost You Money
Closing The Sale Techniques for Luxury Retail