There’s an old adage that goes something like you can’t put new ideas into a full bottle; you need to empty it to make way for the new. To do that you have to be open to the possibility of change.

I thought about that recently when a retailer related how he received pushback from a new employee he was trying to train.  The newbie told him, “I already know how to sell.”

She was so full of her way that she couldn’t accept anything new.

Her method of selling was basically to hang out behind the counter and wait for a shopper to ask a question; only then would she spring into action and take the shopper to the merchandise.

That’s what we find at most retailers nowadays, so it is little wonder new employees feel they know it all.

Selling takes a lot of thought about what you say, when you say it, and how you say it. Only then can you go from being a complete stranger who by developing enough rapport becomes a trusted advisor.

You get one chance to get it right and there are no do-overs.

In selling there is no delete key.

Unlearning is a way of saying you aim to let go of what you have already learned or acquired. It is about being open to a new way of doing something.

Until someone can be open to a better way of doing something, they will fight to hold on to what is familiar.

Throughout retail we are operating with customer service models that have grown outdated or obsolete. You can’t just wait for customers to ask for help. You have to get into the aisles and connect.

They think they’ve seen it all. They know they’ve done it all. And they’re stuck there.

And if it were 1990, that would be fine as a brick and mortar store was the only place to go shopping.

But with no questions asked return policies now the norm, and with customers emboldened by the flexible return policies adopted by e-commerce sites returning products in record numbers, often in worse condition, commissions can be lower weeks or months after a sale is made.

As noted in TheStreet, consumption in the U.S. by foreign visitors is down. The U.S. dollar is strong. This is killing the luxury sector.

Further, Amazon's retail sales in the U.S. are expanding at a $10 billion annual rate even though it makes little or no money on them.

Add to that foot traffic is down across the board, the tickler file that used to work 100% of the time works less and less... throw in a very warm fall...and you’ll find you don’t have the luxury of a missed sale.

The very idea of a long term retail employee is under attack with stores cutting staff at an increasing rate.

Malcolm Gladwell said, “You have all the time in the world to learn everything that needs to be learned – and you have less time to unlearn it.”

If those employees can’t see their very existence is endangered and are not willing to change from the same canned, bored and hugely ineffective greeting like, Anything in particular we can help you with? then you have to help them see the writing on the wall and encourage them to change.

It’s no longer a numbers game; it’s a relationship game to get those shoppers who are distrustful of salespeople to let down their guard long enough to consider anything other than what’s on their smartphone shopping list.

Some employees still believe great customer service always begins by asking a customer, “How are you today?”

It’s a placeholder in a conversation that only encourages customers to be phony and answer, “Fine, how are you?”

Until you can get those employees to unlearn those automatic responses and stop vomiting out those same tired questions, they are untrainable.

The good news is the Christmas calendar is optimal, and if you can get them aware of why they need to change and give them some solid retail sales training like my SalesRX, they can take their veteran sales skills to new heights.

I’m not asking them to forget what they learned, just to see the limitations of what they did prior in today’s competitive environment.

And that takes the willingness to practice.

I was role-playing with a Regional Manager of a major toy company in front of his 30 store managers. All he was supposed to do was to walk up to me and say, “Good morning.” Instead, he asked, “Can I help you?” Realizing he was wrong, he said, “Let’s try it again.” We did.

After the fifth time, he turned to the audience and said, “This is much harder than it seems.” He was right, he had set his intention to unlearn what he’d done by rote for years, but the new learning didn’t come as quickly or as easily as he’d hoped. And that’s OK.

Unlearning is not just applicable to retail sales training.

It could show up with your holiday gift wrappers. At home, they are used to having unlimited time to make packages look perfect.  In a retail store filled with holiday shoppers though, time really is money. You’ll have to convince them to unlearn several of the tiny points they have used in the past to be able to wrap faster to make more people happy.

Unlearning could even show up in your dress code. While someone might be comfortable rolling out of bed in the morning and putting on a wrinkled shirt with a crust around the collar, until they are shown why they have to put more concentrated effort into getting dressed, they’ll resist.

We need them to unlearn, so they break free of the limits and conditioning they are stuck with.

We’re talking about emptying old, comfortable thoughts to create an opening for training to take hold. Once openness is experienced, learning becomes easier and is reinforced by new responses from customers like, “Thank you,” instead of the old tired, “I’m just looking.”

How to help someone unlearn and be open to change:

1. Meet with them to discuss current behaviors and sales figures.

2. Show them the difference between their results and others who have learned a better way.

3. Have them Observe those who have taken to your training and discuss the differences.

Once they are open to unlearning, provide retail sales training. 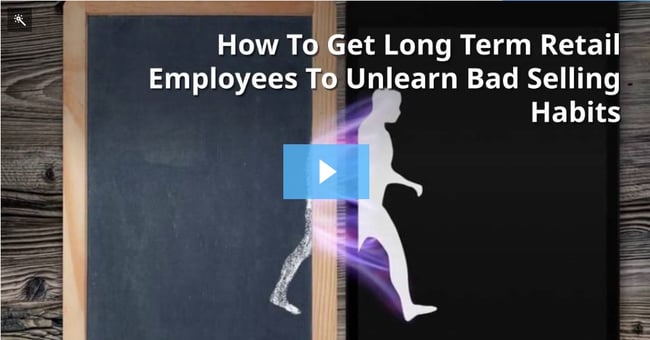 Learning requires us to set aside our assumptions about what is right or wrong.

Often those assumptions came from catch-as-catch learning that occurred on someone else’s sales floor.

Make no mistake, their assumptions did not occur by design or training.

Once your employees can see why their assumptions about customer service are lacking, what selling really entails, and how to make a customer feel valued, then they can learn new training.

When they unlearn unproductive behaviors, they can be trained in the proper way to create an exceptional experience...

One that not only moves merchandise but moves people to recommend your store to their friends again and again.

There’s a whole lesson on how to get employees to accept your training in SalesRX. Learn more about my online retail sales training below.

8 Tips How to Hold a Profitable Employee Meeting

How To Interview And Discover Amazing Retail Employees [Hiring]

How To Correct The 5 Biggest Salesperson Turnoffs For Retail Customers