Selling In A Retail Store: Can You Be A Natural Born Salesperson? 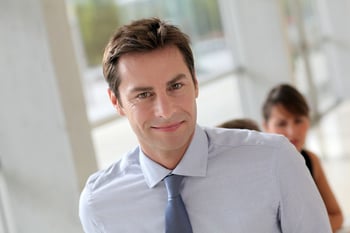 When I hear that phrase, it is often being used as a dig.

It implies being a good salesperson is something you are born with, like being left-handed, double-jointed, or gay.

It implies you either have it or you don’t.

That selling is a talent.

It’s something you don’t have to work at.

Nothing could be further from the truth.

Make no mistake. Selling in a retail store, especially when you are young and feel every slight as a personal betrayal to your soul, is something you have to grow into.

My mom always said, Your father had the gift of gab.

But that’s not really selling. That can just be the result of a big ego and of being so insecure, that you have to dominate a conversation.

To be a great salesperson, you start with being curious about another human being. What makes them tick? How can I briefly get past their defenses and insecurities – along with your own - to get a story out of them?

We want to talk about ourselves.

We want to listen to what we want.

That rarely allows someone else – especially a stranger in.

So we judge them and make up a story in a heartbeat about them and how we’re better, or smarter, or thinner, or you name it.

When you are a salesperson, you live for a chance, however briefly, to become a magician and create magic.

Magic, like when I was collecting my speaker’s badge at the registration desk for a Running Event in Austin. I merely asked the young woman why she had a gold anchor on the chain around her neck. She touched it, smiled, and said she works on cruise ships. She heads group tours as they travel around the world and had just gotten back from the Amazon.

“I’ve never had anyone ask me about it,” she smiled. I told her I had just gotten back from Bogotá and how very different it was from New York. We shared a bit of pleasant conversation about the Amazon, gnats, malls, and New York.

We both talked about work. She said she has December off so she works at the convention center where it’s warm. I got my badge and went on my way. All of that took about two minutes.

I wasn’t trying to sell her anything.

I wasn’t being phony.

And I certainly wasn’t hitting on her.

I was merely curious about this other human being in front of me. If we had been in a situation where I was selling something – other than myself – it would have helped us trust each other.

Many people can show concern for someone with a critical disease or for someone’s tragic story with a passive “like” on Facebook, but that is not going to grow your sales abilities.

These days, so many people have so many walls built around themselves, from the earbuds that block out other voices, to our crossed arms as we wait in line.

Yet we are all screaming for someone to hear us.

Not our smartphone, not the newest sneaker, not the silly cat video we sort of smiled at while doing three other things in front of our computers.

I’ve said it for all the years I’ve been the Retail Doctor, “We’re all just sitting around the campfire telling our stories, hoping someone will listen.”

We are not born looking for other people’s stories. You have to become a student with a lifelong mission to learn about everyone else.

To make someone else’s day by engaging them – just because. To find your own voice and use it to share a brief story from your own life’s journey.

All of that instead of looking online at a blue screen searching for meaning.

A natural-born salesperson doesn’t exist any more than a natural-born baseball player or natural-born singer.  People can have talent, and a certain proclivity to excel but without the curiosity of becoming better, of learning from others – and often from giving back – they’d end up on the sidelines.

Whenever we see a person perform an amazing feat, seemingly without effort, the idea that he or she is a natural is bound to pop up. Unfortunately, that phrase minimizes the years of training and practice the person has put into learning the strategies and tricks of their trade.

It also squashes the idea that anyone could do it as well.  And it can become a loser’s limp to remain stuck – hoping someone will notice us but unwilling to notice someone else first.

And many of those people seem to gravitate to retail because they think it is easy.

Let me tell you something, working retail is not easy.

You face hundreds of people a week with various motivations.

It’s not like closing a car sale once or twice a week.

It’s not like closing a house sale once a month.

That is for anyone interested in another human being or anyone wanting to push forward from the isolation of being a citizen of an ever-connected but disconnected world.

The best approach to fashion yourself into a natural-born salesperson is to learn how to engage someone, to share something from your own journey, and then apply any natural talent you may have to face strangers unafraid.

You can practice it at a restaurant with a server, waiting in line for a cab, or on the phone with your bank.

Those with greater confidence may enjoy greater success at first but only due to better execution of the strategies they learned along the way.

That’s why retail sales training is the foundation to compete. It gives your organization a common language, a common inclination, and a common approach that is anything but common to your customers.

With everyone playing from the same book, natural talent becomes less of a factor to rely on and more of a fringe benefit of lucky hiring.

You too can be a natural salesperson, if you want to. Then you can experience the smiles on strangers’ faces when they realize someone has noticed them.

And at this time of the year, isn’t that especially nice and necessary?

Whether you go on to sell to them or not.

Retail Sales Training Will Never Be The Same

Is An Online Retail Sales Training Program For You?