As a retail consultant, I’ve done plenty of small business makeovers and thought this time I’d bring you along through the process.

As we go, we’ll look at marketing smarter than the competition, visual merchandising, retail sales training, and more.

It’s important to note, every small business is different – there are no cut and paste formulas as each business’ needs vary – could be marketing issues, issues among the principals, wrong merchandise, bad location – you get the picture.

Meet my new client, Black Horse Farms and their two principals, Lisa and Chellie. They peg their start to 1791, when the site of their current location was the Black Horse Inn. This family operation, located in the mid-Hudson River Valley, has been around for generations.

With over 1000 acres that provide produce around the state, this family’s country store and greenhouses lie right off Route 9W (the original Indian Trail to Albany, which starts out as Broadway – yes that one - in NYC) north of Catskill. It is a seasonal store and was due to open on the first day of Spring.

I have been a customer of theirs for many years, and last November Chellie curiously asked what my license plate RetailDoc meant. I told her I was a retail consultant that specialized in retail sales training and small business makeovers. I told about some of my small business case studies' successes and added, “I think we should work together. Your brand has a lot of potential.”

We met for the first time talking about a small business makeover at the end of January.

My initial meeting with Lisa and Chellie focused on the changes in the area and in retail in particular. (One of my clients referred to our initial meeting as a Come to Jesus moment because I was telling him he had to commit to changes, or be gone.) Some business makeovers need a reality check of who they think they are and what the reality is.

I felt their fresh produce and garden center was a draw but that they were not getting the most from their country store atmosphere. They had run a Groupon a few years ago which had to have hurt them. They confirmed it did.

We discussed the things BH Farms was best known for: fresh produce, fresh baked pies and breads, and fresh nursery items they grew themselves. The idea of fresh had to be the mantra going forward. That meant anything not fresh needed to go.

In our area, the economy has gotten better, and more city dwellers are coming up on weekends to second homes or rentals in the area. They arrive on Friday night and go home on Sunday, and while they are here, they demand a taste of the country – with the same standards they find in the city.

Chellie and Lisa's employees carefully pile fresh lettuce and other produce from their farms each day onto shelves in the morning, but by the afternoon, without modern refrigeration, it is wilted and looks like leftovers. I told them as a customer I had always wanted to buy lettuce from them but always went to the supermarket because theirs looked fresher. As a retail consultant, we talked about the big expense of refrigeration, but they committed to upgrading so they could carry the fresh image from opening to closing.

We walked through the store and greenhouses specifically looking for merchandise that needed clearing out. Getting rid of out-of-date merchandise and slow movers would free up money for new lines they didn’t even know they needed.

See my post about Making Friends with Clearance Merchandise

By the time we were done, half of the store was pegged as needing to go. We had to come up with a clearance sale and quick. We didn’t want our first-day-of-Spring opening to be a garage sale of old merchandise.

The sale would have to be memorable: Half the store, half-off or more.

We brought all the sale merchandise together in the north greenhouse. We put butcher paper over the windows so no one can look into the actual store. When the sale begins on March 2 at 7AM, customers will only be able to come in through the one greenhouse door where they’ll see the sale items ½ off the marked price. At 10AM, anything left will be marked down even more - anything still there at 11:30 will be drastically marked down. We want it all gone!

Getting the Word Out

They added me as an administrator to their Facebook page and I changed their profile picture from daffodils which looked nice, to a shot of the two sisters and their chief employee Jared. I also created a quick cover photo of a pig holding a sign saying save the date. (As you know, a pig in the window is one of my signature elements to visual merchandising design.)

I then began posting about the sale. But merchants, unless you pay for Facebook’s promoted posts, they are only visible for about an hour. I showed them the power of paying for Promoted Posts to gain a larger audience. (You might have wondered before why some posts stay at the top of your Facebook feed longer than others - Promoted Posts is why. )

We started promoting the sale posts for a maximum of $10 a day to friends of the page and their friends. We created the sale as an event on Facebook too and promoted it. We got lots of additional views but not as many as I wanted.

That’s when we starting shooting videos. 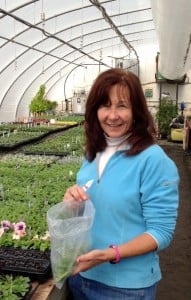 The first we uploaded was of Lisa planting petunia cuttings, the next of Chellie showing the fuchsia pots and explaining why theirs were better. The views went up dramatically.

Last week, I videoed Jared talking about what customers would see at the sale. Above with the video post we added, “Appreciate your ‘likes’ ‘shares’ and comments.” We used Promoted Posts and the number of “likes” “shares” and views skyrocketed.

Take a look at our insights in that short time at left.

Next, we took the same artwork of the pig and sent it out to their email list. We will also send a reminder on Thursday and Friday Our goal is to build enthusiasm for the sale, but even more importantly, for the brand and the re-imagining of the business.

Finally, we created a press release announcing that Lisa and Chellie had hired me. It told a bit of their story and – you guessed it – announced the sale coming on March 2. And just to be sure it would be noticed, it included a color shot of the three of us in front of the building.

Then I followed up with the reporters to make sure they got it and would run it.