Each year presents retailers with new opportunities, old challenges, and outside forces that will affect their prospects for a profitable year.

What happened in the previous year can help you spot and plan for the trends of the future.

This is my take…

Robots are here. Last year we saw Orchard Supply get a lot of press about their trial of in-store robots as did Aloft with their hotel’s robot butler.  Some pundits see them as the way of the future. Novelty can be intriguing but robots are a long way off for mass adoption in stores.

Thanksgiving will be just another shopping day. Even though those extended Thanksgiving hours until midnight didn’t produce more sales over Black Friday weekend, don’t think they’re over. Unless you’re a big-box retailer though, those two days won’t mean much.  If you're an indie, plan now for how to leverage Small Business Saturday, November 28th.

The future is subscription. The explosion of users of Spotify and others show consumers want to subscribe more than own.  If you sell any DVD or CD, you’ve been warned.  Amazon is now offering monthly subscriptions to their eBooks, which may be great for their customers but disastrous for authors. Is there a way to offer a subscription to your products or services to ride this trend?

Rural mall anchors are set to be closing.  JCP will continue to valiantly right the damage done by Ron Johnson’s rotten experiment, and Sears/Kmart will continue to slide after 31 consecutive quarters of losing sales which will force them to sell off even more locations.

Anchor closings will hit the middle of the country the hardest. 3% of malls are predicted to close this year. If you are located next to one of these closing anchors, get with your mall manager to discuss contingency plans.

Apple watch will be the accessory to have. Each Apple iPhone launch has drawn money out of the wallets of consumers, especially those in larger urban centers.  This year’s Q1 Apple Watch launch could affect many retailers as well. Quite simply, when people have to have an item that costs $300-600, that money isn’t around to be spent in your store.

Malls regain appeal but not for the young. As more malls add restaurants in place of retailers, they are remaking themselves as town centers, which may be good for them but it is frequently at the expense of teen retailers.  With many Millennials buying from each other, on Craigslist, or Ebay, it appears there is a fundamental shift away from purchasing new at the mall. With the news of teen retailers, Deb Shops and Delia’s, going bankrupt and the threat of Wet Seal joining them, this could be the largest concern facing struggling teen retailers like Abercrombie this year. 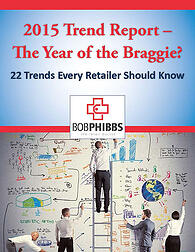 Stores that try to court the young by screaming low-price deals over and over again destroys the retail environment for Baby Boomers, who can afford and will buy what the upscale malls sell.

That’s really important because Boomers are still the ones in charge of 70% of disposable income.  Smart retailers will realize that the race to the bottom on discounts is not the way forward to a profitable 2015...

To read all 22 trends every retailer should know for 2015, including what a MAMIL is, why you should encourage Braggies and more, just enter a bit of information below.

How Retailers Can Keep Up With Retail Consumer Trends