Episode 206: Ralph Simons, CEO Tane | Clients Buy With Their Eyes, Then Their Wallets Bob Phibbs interviews Ralph Simons, CEO Tane luxury jewelry in Mexico. Ralph talks about his experiences selling luxury, how selling luxury is different and how much the salesperson can determine the client's buying choices.

Tell me something good about retail

Ralph Simons, CEO Tane: Clients Buy With Their Eyes, Then Their Wallets

Ralph: I'm Ralph Simons. As you said, I'm the CEO of a Mexican luxury brand called Tane and I have a career of almost 20 years in luxury and in retail and I moved to Mexico about a year and a half ago to be in charge of this beautiful brand here.

Bob: Yes, it's beautiful. It's beautiful work and you have such experience with luxury brands. How did you start out? You're really kind of a watch guy. Isn't that how you started out?

Ralph: So my career started in Amsterdam, the Netherlands, which is where I grew up. And after college in hospitality management, I joined our luxury watches and jewelry family company which was started by my father and this is where I dealt with retail for the first time professionally. At the time we were distributors for brands like IWC, Hermès, and Frédérique Constant. We had a quite diverse portfolio of brands and in my role as sales manager, I learned what is needed to be successful in retail. And for me the most important element is training because I learned there is something very powerful you can do in retail, which is influencing the client's choice.

Bob: That's a great point especially with those very diverse brands that you had.

Bob: Isn't it easy to come up with one that you personally like? And then without, you know, training, the salesperson just sells what they like right?

Ralph: Yes, that can happen or the salesperson just sells what the client asks for. But because the salespeople can influence the choice of the client, this is where the training comes in, because if one brand is stronger at training the people than the other brands then, especially in a multi-brand environment, there is a good chance for the salespeople to actually sell what they want to sell and not sell what the client initially comes in for or what might be the expected thing to sell.

Bob: Yes, I think that's such a great point, Ralph, because if I just give you what you asked for, and you leave my store, and then you're going to brag to a buddy and the guys like, "Why do we get that thing?" and you're like, "Well, that's what I thought was the best." And they're like, "No, this is what's the best, this what I have," ultimately you fail and they probably don't come back to you again. Right?

Ralph: Exactly. I mean, you're not really selling if you're just giving the client what he wants. I think it's your job as a salesperson in retail to actually let the client explore what else is out there and maybe it's not the most common brand or the most well-known brand but maybe there's other brands that offer something unique that you don't know of or maybe something better at a better price or something handmade versus something made by machines. So there's... I think that's the power of a salesperson in retail. That you can let the client explore and show him or her what's out there.

Bob: Yes, I think that's really good and especially with watches which, let's face it, everybody says they've got the best watch. I think you launched a brand once and then recently you were the CEO of Chopard USA. So you have a lot of experience with this really highly engineered, highly craftsman...craftsmanship piece of jewelry or ornamentation. And what is the key to making luxury work?

Of course, you need to create a story around luxury. Storytelling is very important in luxury. That's why historical brands are typically stronger at that because they have a lot to tell about. Doesn't mean that all the brands that have a lot of history are good at telling their story but at least historical brands have a more to tell, a lot to talk about. And then like I said earlier, and then comes the point of training the salespeople to make sure they can have a genuine sensible conversation about the product with the client. Yes, those are the key elements.

Bob: Yes, I would agree. And you had to craft a story then to launch a new watch brand, right? You had to start from zero.

Ralph: I was in charge of that. Frédérique Constant was launching the brand in the United States or in the Americas. So there was already a story and it happened to be a very good story because the brand was offering something unique, which was high-quality, Swiss-made watches at sensible prices. And this was a very successful story, especially since the downturn of 2008, 2009. Offering value as a brand, even as a luxury brand has become increasingly important. And this was a story because we launched in 2008 actually just after the Lehman Brothers disaster. And it turned out that this type of product was what the retailers were looking for in the market and it wasn't really available in the market.

Ralph: So, of course, we had to adjust the story a little bit to the United States markets, but in general, the story was there it was a matter of communicating it and a matter of making sure that the sales people in the store knew how to sell this brand, which was not known in the market at the time compared to the competition that was maybe much more known.

Bob: Right. And do you think that the luxury consumer has changed much in the last 5 to 10 years Ralph?

Ralph: I mean, I think the luxury market has gone through a lot of changes in the last 10 years. Yes. Some people say it has gone through more changes in the last 10 years than it went through in the 100 years before that. I don't know if that's true but I mean, it goes about...it says something about how much change there has been. Yes, the luxury customer has changed. I think one of the key changes as I mentioned after 2009 was the desire for value so, you know, people are not afraid of spending money but they want to know that what they're getting in return for their money is something that has value, maybe not that it holds value because ultimately luxury is about enjoying. But it's something that has a certain value, not something that has a price stuck on it that, well, that is based on nothing.

Bob: That idea around the salesperson being able to sell it and tell the story, do you think it's required that they wear it or that they can afford it themselves or should brands help them be able to afford it? What are your thoughts?

Ralph: Of course, ultimately, I think it's best if the salespeople in the store wear the products that they sell. But in some cases this is difficult because brands, some brands, they sell products at prices that are not affordable. But I do think it's important. So what brands do often is providing pieces on consignments to their staff so that the staff can show off those pieces. I mean, it's very weird if you walk into a Tane store for instance here in Mexico and they are wearing pieces from other luxury brands.

Ralph: Yes, of course. Now the clients also look at what the salespeople are wearing or they even asked like, "Okay, which piece are you wearing?" Then if you have to mention another brand name, I mean that's, very sensitive.

Bob: You know, you've come from the market, you certainly have been all around the world and most recently you were in New York.

Bob: And now you're in Mexico City, how do those new markets...how different are they?

Ralph: One big difference between Mexico City and New York City, New York or the US, the US is really very far to...specifically New York actually, is very far advanced in terms of adapting to changes in retail. You know, I mean, for instance, e-commerce is flying high in the US and here in Mexico it's definitely a little bit behind in terms of that development. It's here and you know, there's the..Amazon is here and they're very active and next year it will be running at 100%. So they will be running at a very similar level as in the United States.

Palacio de Hierro which is the high-end department store chain here in Mexico, which is very comparable to Neiman Marcus for instance, they have a big business in e-commerce. If I look at Tane, Tane is a direct-to-consumer brands. It's been around since 77 years so it was founded in 1942 and it's a luxury house specialized in jewelry, silverware and art objects. And it has always been a local company and we currently have 26 own stores. So it has always been a direct-to-consumer. At the moment even though the brand is very successful, we had a very successful 2018, we have long...we have kicked off the year 2019 very successful but we have very big ambitions and one of them is to develop our e-commerce channel because at the moment we don't do e-commerce so we are behind in that development. But on another side of this also gives us a benefit because we can see in the market what works and what doesn't work and learn a lot. But at the same time. We are investing in data collection software, renovating our complete store network, launch of our mobile retail concepts, development of our corporate sales channel, and ultimately it is our goal, our dream to go international with the brands.

Bob: You've been gracious with your time. Tell me something good about retail, you've been working in it awful long time. What's something that you like about working in the retail space?

Ralph: I mean there's a lot of things I like, but if there was one thing I had to mention it would be the dynamics of retail, you know, especially today in luxury retail and branding is an ever-changing environment. And innovation and reinventing yourself and your company without losing focus on the overall brand strategy is what I really like the most. Well, we just talked about this.

Ralph: That's really what I like the most about being in retail.

Bob: And how can they find out more about your brand?

Ralph: Well, they can go to tane.com.mx or they should... I would recommend people to wait about two weeks to do that, depending on when we're launching it because we are relaunching our website completely. It's going to be a completely new one in about two weeks. So mid-February, we will have our new website including e-commerce for the first time. So that's very exciting. And of course, people can go to my LinkedIn profile to find out more about me if they want. But the brand is more important to find out more about.

Bob: Excellent. Well, I appreciate your time today. Ralph and you have been gracious with your time. Thank you.

Find out more about Ralph

BECOME A GUEST ON MY PODCAST 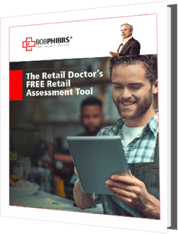 Use this free Retail Assessment Tool to discover where you truly excel in retail, and uncover areas for improvement.