Topics: selling How To Get Shoppers To Buy More Greeting

Selling In A Retail Store: How to Disarm Customers in 10 Seconds 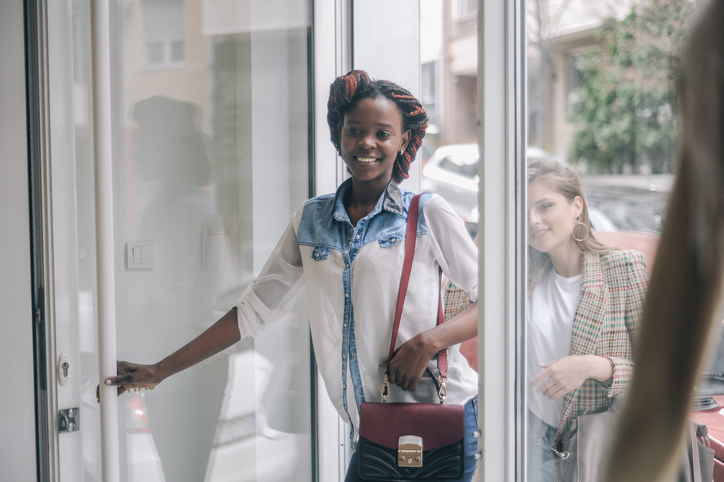 In the moment after someone has walked into your store but before the salesperson has spoken to them, anticipation builds. Here’s how to make sure you engage and not turn off each customer.

I walked into a jewelry store in the mall the other day to look at men’s rings.

Within seconds, I wished I’d headed across the mall to Cinnabon.

The jewelry salesman committed several mistakes typical of untrained employees. Within three seconds of me arriving at the counter, he reached his hand fully across the counter and with all-fingers-extended pushed it towards my face and announced, “I’m Winston.”

I thought about not shaking it. I’m one of those people who don’t want to be forced to shake hands.

In fact, I hate people who do this from car dealers to flooring guys; it makes me defensive.And I'll bet it makes you aggravated too.

He then stood there with his outstretched hand in my face waiting for me to shake it, which I reluctantly did but without saying a word. He stared straight into my eyes and said under his breath but loud enough for me to hear, “Hi Winston,” as if he was instructing me.

I wanted to bolt, go to the nearest restroom, and wash my hand.

What Winston did that so many untrained employees do time and again is force themselves onto the unsuspecting public. That makes it harder for every other salesperson in the store trying to build rapport.

A moment later, a young man and woman came up next to me. A saleswoman whisked behind the counter and committed an even worse selling mistake.

And it happened within 10 seconds.

She asked the young man, “Do you know about gemstones?” He replied, “No.”

She said, “Well don’t get a titanium ring then; it crumbles. I had an uncle who lost a finger when he got his ring caught in a machine.”

The couple, shocked, looked at each other with disbelief as if they had been smacked by a bloody hand.

What the woman did was share an inappropriate story, one that was inappropriate at any time but particularly at the beginning when you’re trying to build a relationship. I don’t even think what she said was true about titanium rings not being tough.

In both cases, these salespeople did what salespeople who do not read their customers do; they tried to make strangers like them.

But you get how Winston got there, right?

He was trying to be polite. When we go shopping, it always feels more natural to buy from someone seen as a friend than a stranger. Right?

Though his intent was right, his approach and greeting were all wrong. He missed a crucial opportunity.

The handshake started back in medieval times as a way of relaying peaceful intentions and disarming strangers. A person would extend their empty hand to show a stranger they were not holding weapons. The up-and-down motion is thought to have been a means of removing any knives or daggers hidden up a sleeve.

Nowadays, you disarm the shopper when greeting them with correct words.

A handshake is something that is earned at the end of a sale, not forced; it is initiated from a satisfied customer.

I get how the saleswoman was trying to bond to the shopper based on what he said by using a personal story of her own. We all remember that old kids’ song John Jacob Jingleheimer Schmidt, and the line that’s my name too!

She too missed the crucial opportunity.

What should happen during the first 10 seconds of a sale to win customer loyalty?

When a fly comes into a room, do you grab a flyswatter and begin running around trying to swat it? Unless you’re five, I’ll guess not. No, you wait for it to get comfortable enough to lite.

That’s your number one goal of your first 10 seconds of a sale, to get the shopper comfortable enough to linger and trust you.

When you miss this, it’s like you’re focused from the start on closing the sale. Both of these approaches are amateurish and built from desperation.

When a salesperson feels every sale means the difference between them making rent or not, they tend to go rogue and do whatever they feel is right in the moment. Or worse, they default to the forced handshake gimmick from the 50’s.

If you’re looking for how to sell a customer who says they are just looking, realize you as the salesperson caused them to tell you they were just looking because you said some variation of, “Can I help you?” when you greeted them.

When you wing a greeting or try to qualify a customer and expect them to tell you what specific item they are looking for, it is often due to your own needs.

Shoppers already browsed online while also watching Game of Thrones on an iPad before they ever visited your store. They figuratively raised their hand they were interested in buying from you when they searched and found your retail location.

When they got in their car to make a special trip to your business in bad traffic and weather, they raised their hand too that they were interested. When they struggled to find a parking place and walked through your doors, they too had hope they’d find something in your four walls.

What shoppers want when they walk into a store is acknowledgement for their efforts for getting to that point.

What is the flawed approach to greeting a shopper?

Likewise when someone enters a store, there is a moment of anticipation of finding that perfect dress, the right gift, or the new furniture. Tension builds with hope until they are greeted. You either add to that hope or dash it.

When a salesperson runs up to a shopper and asks, “How are you doing?” or forces their greeting on an unsuspecting public, it disperses that anticipation of hope. The chance to engage is thrown away.

When the saleswoman started oversharing her uncle’s story, it squandered her greatest chance to engage and captivate the young couple in a good way. She let go of her potential to become a trusted advisor.

A salesperson’s task in the first 10 seconds is to build on a wary shoppers’ hope they had when they came in and to make sure they feel welcome as they get their bearings in the store.

When you do this, the shopper's hope is maintained and they relax.

Anything more in the first 10 seconds can take you seriously off course by invading a person’s privacy, like Winston, or jolting a shopper into having to think about something they never wanted to, like the saleswoman.

Shoppers are most likely to buy from a salesperson when they’re emotionally invested in working with them.

Quite simply, people who feel they matter buy more.

Selling gets easier when your sales team understands this concept.

When you consciously choose to obsess on how every word you utter to help lead that shopper to trust you, you will make more sales.

I was ready to leave and wash my hand because the young man had not built my trust, he’d abused it.  The young couple left because they didn’t come in to feel violated by images of dismemberment.

Unless and until you can disarm a shopper in the first 10 seconds with a greeting that carries hope, you’ll find it tough to build credibility or grow your sales.

Bob Phibbs
Topics: selling How To Get Shoppers To Buy More Greeting

Reasons Retailers Struggle to Sell And How To Rise Triumphant
How To Gain A Positive Customer Perception Of Your Brand
Value Selling: How To Sell Value Over Price In Your Store
9 Tips To Get Last Minute Shoppers To Spend  More In Your Brick And Mortar Store