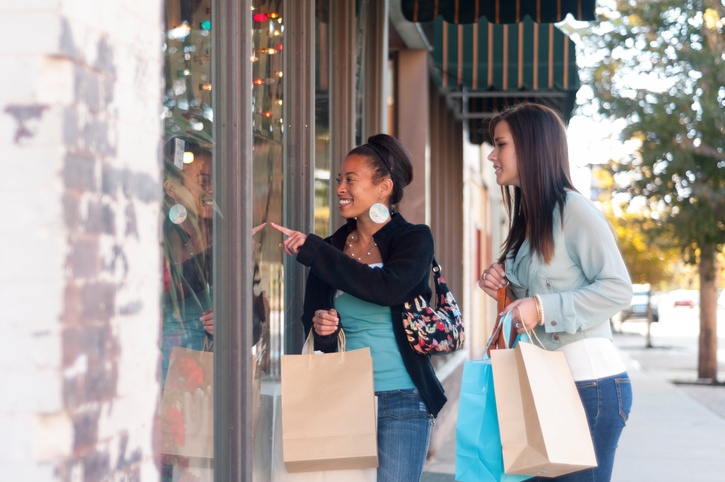 A great downtown has a thriving independent retailer community working at the top of their game. New businesses open and add to the mix of merchants who fight for every shopper in a dynamic city core.

When that stops, storefronts sit vacant.

It seems even NYC has the same problem that bedevils many downtown shopping areas around the country...

Shoppers and merchants want to know What’s going on?

That’s because when shoppers see fewer viable businesses on the street, they venture onto that street less and less.

As shoppers vote with their feet, it costs other merchants’ business and decreases retail sales taxes collected; entire neighborhoods can deteriorate into urban blight.

That’s why this past Friday, New York City Mayor Bill de Blasio said that he wants to penalize greedy landlords who leave shopfronts sitting empty. “I am very interested in fighting for a vacancy fee or a vacancy tax that would penalize landlords who leave their storefronts vacant for long periods of time in neighborhoods because they are looking for some top-dollar rent but they blight neighborhoods by doing it.”

But should landlords be penalized because merchants don’t want to open downtown?

Let’s face it, it is easy to bitch about city councils who don’t do anything about parking, infrastructure, or a million other things. But why do merchants think politicians should act before they themselves do?

Downtown merchants first have to reinvigorate their own stores.

They have to prove they are in business for the long haul and show their city councils they are serious about fighting for customers.

Yes, everyone wants convenient parking and with additional online delivery companies taking up space – it is easy to scream at the city – we need more parking!

Yet some retailers allow their own employees to park in front of their businesses which robs easy-access parking for their shoppers. This became clear to me when I saw a story on the local news about a shop owner who complained there was no street parking on Main Street. I just happened to see her...and her employees all parking near her store on Main Street.

And that isn’t her local politicians’, her local business improvement association’s, or her Chamber of Commerce’s fault - it is hers and all the other merchants are doing what is convenient, not what is prudent.

You can always wash your windows, pick up the trash in front of your store and those on either side, and clean your own sidewalks.

3 Steps To Bring Your Downtown Retail Shopping Area Back To Life:

1)    Help yourself.  When was the last time you took everything out of your store and cleaned, really cleaned the carpets, the flooring, scrubbed the walls and repainted, replaced yellowing light fixtures and ceiling panels, installed more lighting, replaced old fixtures, cleared out the junk and started fresh? I’ll bet never.

After you’ve cleaned everything inside, when was the last time you looked at your store from the outside and repainted, created exciting window displays, fixed your exterior lighting - the works?  Do it. How is your technology? Do you have a cloud-based POS system with modern reporting functions? You must. Once you get the physical store renewed, evaluate your employees and how customer-focused they are. Provide retail sales training to create an exceptional customer experience.

Next update your website with pictures, videos, and helpful articles, directions to your store - the works. Next look at your own marketing of your business with direct mail, social media and promotions. Do not think you don’t need a mailing list, email list, and energetic social media presence - you do.

Finally, start or revamp your online store. You can’t compete with Amazon and the rest, but your own shoppers should be able to shop from you any time they want, and be able to pick it up the next day. You have to have your business updated so when your Chamber of Commerce or Downtown Association offers workshops, you can participate and grow your retail sales.

2)    Band together. Have a meeting and brainstorm why shoppers may not care to come  downtown to shop – and leave Amazon and online competitors out of it. That’s a loser’s limp and you can’t do anything about it, but you can control many things.

Are your stores closing at 5pm; are they closed Sundays; is there no convenient parking; is it hard to find help in stores; is the street filled with dingy windows? You get the idea. Get those at the meeting to commit to cleaning up their individual stores first... like I described above in number one.

After you have your game plan, encourage those who want to change to go out and buy a half whisky barrel, fill it full of planting mix and colorful annuals like petunias, put it in front of their store, and take care of that one planter. That colorful planter becomes a visible signal to the rest of the merchants that you take your business seriously. Track your sales and conversion increases and continue to build your merchant community.

When enough retailers get the message, it will be obvious to your local city officials that something is happening, and they’ll want to support you…instead of being told they have to support you.

3)    Approach local politicians, state officials and granting agencies. Tell them what you want: a renewed focus on the city center, new parking, more restaurants, a tax on landlords who are sabotaging your efforts to make downtown a vital retail shopping district, a façade improvement program, a branded entertainment district, or even retail sales training for all the merchants. Cities and counties are stretched to the max with declining revenues and growing infrastructure and pension obligations, they aren’t looking for ways to spend but save.  But when they see your businesses are looking for a hand, after doing the hard work on their own stores and building a coalition of other stores, they’ll know you aren’t just coming to them with problems and looking for a hand out.

A lot of downtowns now offer some type of a once-a-month stroll and savor event to get people to discover downtown. It’s relatively easy to put on such an event, but don’t just throw a party.

Don’t fill your street with food trucks from outside your shopping area or booths that showcase merchants from outside your area. Those do nothing to entice return visits and your whole event just devolved into an excuse to pat yourselves on the back and say you did everything possible.

You need to make sure your stroll and savor focuses on your businesses so your attendees convert to paying customers and return on other days.

Whether it is big city or small downtown revitalization, such projects require cooperation. I’m always surprised with the anger from a few merchants directed at economic development corporations, Chamber of Commerces and the like who are oblivious to what they themselves need to do to help make a great downtown shopping area.

Those merchants demand the city do something to help them, expecting changes outside before they have to change inside.

It’s like saying to your fireplace give me heat and I’ll give you wood.

It doesn’t work that way.

You’re in the same boat.  You can’t take shoppers for granted. It takes everyone pulling in the same direction to get somewhere.

And that starts with you.

Retail Success: How To Keep Your Store From Being Your Ball And Chain
8 Ways To Use Small Business Saturday To Grow Holiday Retail Sales