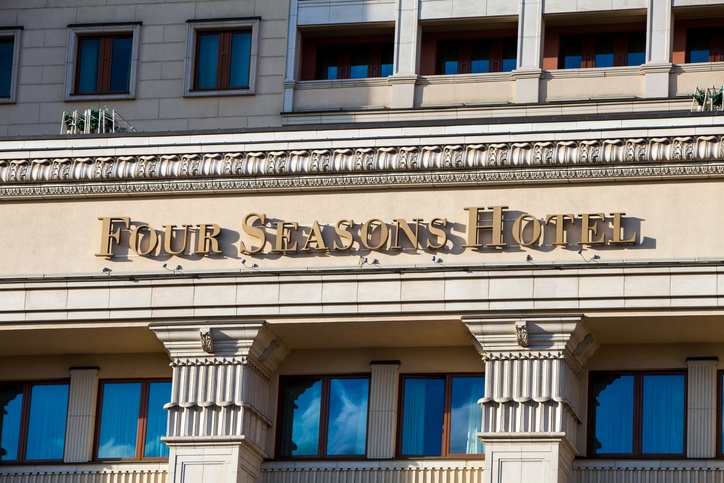 I was speaking at the Four Seasons hotel in downtown Houston.

After I checked in late Thursday night the front desk agent came around the counter, he personally handed me the key cards with "Welcome," and pointed me toward the elevator.

Nice, similar to what some high-end retailers have implemented in recent years.

Once in the room, I opened the closet to grab the iron and noticed a can of spray starch. Nice, I’ve never seen that in a hotel.

I went to fill up the iron and noticed that this model let you hold the iron flat so as you filled it, you didn’t dribble the water all over the handle/ironing board. Big deal, you may be thinking.

It is a big deal when you wet the ironing board and in turn, your shirt.

I was surprised that night at how quiet the room was until I walked out the door the next morning. That’s when I realized there was a spring that stopped the door from slamming shut after you, yet it closed firmly and quietly.

I met the staff to setup; all professional and polite. Blake Ogilvie, the AV guy chatted while I sipped a Diet Coke. The hotel events manager then personally walked me down to the room I would be using later. I learned how he had been the cameraman for Anderson Cooper during Katrina. The manager still lives in New Orleans and commutes on weekends because he likes his job so well. Windows of Contact in action longtime readers!

The keynote went well and we broke for lunch. Most of the crowd had already been through the buffet line. The server Genova turned and asked if I would like some soup. "Sure," I said. "How did your speech go this morning?" she asked. Really nice.

I had lunch with a group of dealers who were all positive and stoked, then off to a breakout meeting on the second floor. As Blake met me at the table to escort me to the room he said,
"Just one question Mr. Phibbs, don’t you need a projector for your internet marketing session?"
Yes.
"I thought so but one wasn’t ordered, I’ll just go up and take the one from your presentation this morning in the ballroom."

As I set up my MacBook Pro, the room filled with people and we were up and running. Blake asked if I had a moment and showed me how to start the recording in case he was called away. "But I’ll be here to start so there shouldn’t be a problem, I just wanted you to know."

We began the session to an overflowing room of standing and seated dealers. It went very well, very engaging with great sharing of ideas. I had about ten people asking questions afterward and only had a 15 minute break before I was to start the other session."

Time slipped away and I didn’t even get a chance to get something to drink when I realized the room was again at capacity and time to start.

I turned around to start the recorder when I noticed Blake had miraculously delivered a Diet Coke and a bottle of water for me - without asking. A few seconds later he was there smiling, pressing the Record button.

Afterwards, Blake handed me the two CDs and told me that if for some reason they didn’t work, he burned a file onto his computer - just in case.

I finished and checked my voicemail, I’d wanted a massage at the spa but they were booked.

I walked around outside the hotel a bit but not much there. That’s when I spotted a huge new Hilton by the Convention Center. They had to have a spa. Sure enough they did. It was 5:10. "When do you want to come in?" Anytime tonight. "I only have one opening at 6, can you make it?" Sure.

I went back in to the Four Seasons restaurant. The host greeted me and asked, "Would you like something to read while you’re dining?" then pointed to a display of about five different papers I could read.

I told the server I had a 6pm massage at the Hilton. She tried to figure how long it would take her to walk to it - about 10 minutes. She understood, recommended either the fish or pasta, put the order in then got my drink. She suggested I come back for dessert and she closed the check to save time.

I got to the Hilton at 5:55 for a great massage with Travis and a facial from Evelyn, both super.

When I got back to the hotel I figured a night cap would be fine and went into their lobby bar which feels more like a comfortable den, dark but cozy. A pianist played easy tunes and the obligatory plasma TV had no sound on.It was very peaceful.

The server took my order and brought back the glass which was filled about 1/2 full of Sapphire gin and a bottle of tonic. Nice- usually you have no idea how strong a drink is – and that was strong. He came back about ten minutes later and asked if I would like a magazine to read.

I returned to my room and started to pack. When I got to the closet I noticed the dirty clothes that I had thrown on the closet floor had been put in a plastic bag by the maid.

The shuttle driver to the airport the next morning went to two Starbucks - yes Starbucks – until we found one that was open and I could get their oatmeal since there would be no food on the Southwest flight home.

In all there were about 20 things I didn’t set out to notice but did; I’m sure there were more. If you're looking for a great conference hotel, the Four Seasons Houston should be your choice.

The reason so many luxury brands are having such a tough time is because you can’t find any of the reasons they got a reputation for greatness.

Legendary service made Neiman Marcus, for many it’s just a warehouse of very expensive items. For me, there isn't one thing special - let alone a host of special things like the Four Seasons- about shopping there. And there are plenty of other retailers trading on their former glory.

Truly great brands like Apple or Mercedes, are a sum of many co-ordinated fluid parts that shouldn’t draw attention but exceed the customers’ expectations.

Perhaps I noticed all the little things at the Four Seasons because I travel a lot. Maybe it is because it’s an occupational hazard – I know how hard it is to make a brand. Maybe its because I’m a people person and could appreciate the vision of such a level of customer centricity and the team that made it a reality for me. It was a remarkable level of hospitality.

I’m reminded of the time a new COO was brought into a company I was working with. He told me in all candor, after seeing the culture I had been working 8 years to nurture – one of exceptional experiences - first-hand, "Bob, that’s a very high mark that I don’t think can be maintained."

Of course a culture of exceptional experiences is hard to create, nurture and strive for.

But what’s the option? Accept defeat hiring only people who will stand in front of the counters, or be like the Best Western I saw with a sign at their free breakfast, "One piece of bread per registered guest."

I can hear the naysayers now, "Bob, in this economy no one will pay a couple hundred dollars a night at some fancy luxury hotel – it’s just a bed."

No, a no-name motel is just a bed.

Luxury is nothing but quality.

It is greater than each individual part. Those who pooh-pooh such standards usually can’t imagine such a level of service so they don’t treat themselves to first class.

Also notice how Four Seasons doesn't advertise "we put a can of spray starch in every room." They know the sum of the little things that you may not even notice at the time is what makes the experience exceptional. It's in the doing, not the saying.

And that brings me to the point of this post...

If you can’t appreciate it, if you can’t bring yourself to experience it, how will you develop the muscles you need to give it in your business?

When "settle" is your mantra, how can you possibly "exceed"?

I’m not saying you need to go to the Four Seasons, buy a Tiffany pendant or fly first class to Buenos Aires; though that may not be a bad idea. But I am saying if you only go to Wal-Mart or Costco, how do you know what great customer service even is?

When great customer service is getting a frappuccino in under 30 seconds for most of our employees, it is up to us to strive for a better way. A better way to anticipate and deliver what our customers want.

It’s not business as usual. It’s not downsizing. It’s not discounting. It is about doing better, not less.

It’s striving every day to exceed in a meaningful way – like Blake did by connecting the dots from what would a harried speaker want, to how could he deliver it, to finding it and personalizing it, to what he’d seen me drinking when we first met hours earlier.

So what do you strive for? Watching the bread or delivering the Diet Coke when no one’s watching?