Top Retail Trends 2012 - Who Do Your Customers Trust? The Surprising Answer

Looking at top retail trends at the National Retail Federation's Big Show in New York last week, I sat down with a number of experts to have a point/counterpoint discussion of some of the hot topics in retailing. Sponsored by Alert Technologies, these dialogues allowed us to interact and help you as a C-level executive look at some of the more complex issues concerning brick and mortar stores, their employees and interactions and challenges from technology.

This interview features Paul Schottmiller from Cisco Systems and I discussing purchase influencers, staffing levels, technology and luxury boutiques. Here is the video to watch and an edited transcription below.

Bob: Paul, so much of the activity here at the NRF Big Show in New York City is about technology and how we're going to do all this stuff in the store and we value everyone. But as you and I started talking, we realized where the pedal meets the metal - in the store- it's a little different. And you had some thoughts on that.

Paul: Yes, there are a lot of segments in retail where it really appears they've sort of given up on the idea of staff in the store to help their customer, and I think that's creating an opening for technology to come in and potentially play a role. We did a recent survey of 1,000 US consumers and asked them their top three influencers in the buying process, who helped them buy, and only 13% said store associates were one of their top three influencers, whereas 68% said online reviews.

Bob: From anonymous people. (See the NYT article, “For $2 a Star, an Online Retailer Gets 5-Star Product Reviews" )

Bob: That could have been bought, or from a competitor, but they trust them more.

Paul: Yes, and there's a real uptick in that trend. 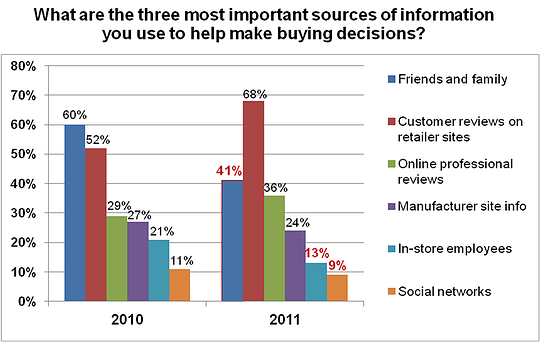 Bob: So what were the top three?

Paul: Yes, other types of online recommendations and reviews as influencers.

Bob: And is that different from geography or age?

Paul: There was some segmentation by age and the things that you would expect.

Bob: The younger, the more tuned it.

Paul: Obviously, younger people, but, quite frankly, even in the middle age and up categories, more and more interest and initiative
around using the technology channels.

Bob: Astonishing. So from my side, of course, I would take that we can grow that 13% if you train your people better.

Bob: I mean, that's clear. But on the technology side, you'd say, "Well, if that's the case, then why would we put any money in our employees?"

Paul: Well, the question is, "What's your value proposition to the consumer?" If it is qualified labor in the store, then you really need to make that a focus, and you need to spend the time, the energy, the money, and the talent to develop that. If you don't, other people will and you'll be replaced by these technology sources. I believe for a lot of retail, the reason we're seeing what we're seeing is that a lot of retailers have given up, and they really don't have a strong effort towards making that differentiation. It's different. It's different at Wal-Mart than it is at Neiman's or Nordstrom, for sure.

Bob: Yeah, but the Amazon feature changes everything I think . . .

Bob: . . . because maybe you were able to get an extra $50 for your item, and now the tuned-in customer is going to say, I can get it on my phone for $50 less. Now you've got this, almost violence, against your employee. He has to decide, do we do it or not? It becomes a policy or a service issue, but regardless, that $50 is gone from the system.

Paul: What we saw was that if they're absolutely price shopping, very focused on an item, particularly commodity items and price focused, things like technology and that’s very difficult to overcome. You've got a level of price transparency as a function of the smartphone and the mobile in the stores. Now if you can catch people earlier in the decision process, in phases we call discovery and inspiration, then if you're providing them that guided selling, either in person or through some of your online tools, it does somewhat alleviate some of the pricing pressure that we'll see otherwise when people are simply shopping.

Bob: Luxury goods are now arriving onto flash sale sites like Gilt. So those products may all look great on Madison Avenue, but when it really gets down to it, luxuries could become commoditized too, right?

Bob: So what would your advice be to a luxury retailer, for example? To not become a commodity.

Paul: First off, you have to look at the digital component of the experience. Ignoring it is absolutely the wrong strategy. You need to look at it and figure out how you're participating with your customer in that journey, the digital, but also the human interaction pieces, because the human action piece is important in some categories in some segments in some retailers for some customers. And if that's part of your value proposition, you need to make sure that you're not kidding yourself in terms of the investment in that area . . .training your employees and paying your employees. If you do, just like if you've got a higher price, it's going to get exposed by the technology very quickly.

Bob: But even then, if I had an extra person on board for three hours, let's say, and that cost me an extra $30, isn't the potential that if they turn just one sale around, they would more than pay for the person?

So what say you? Are some brands kidding themselves that they are staffing sufficiently? Do you trust strangers to verify the trustworthiness of a brand or store? Please enter your thoughts in the comments below.

If you haven't downloaded my special report: Bricks and Mortar Retailing At Risk in the Digital Age, you can still do so here.

My thanks to Marge Laney at Alert Technologies and our cameraman Brian Laney who made this all sound and look great!