Independent Retailers: Don't Make These 5 Email Mistakes Like I Did 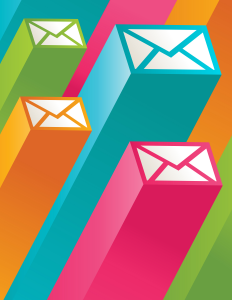 I have a confession to make…

I don’t know it all.

I know, I know, for a Driver personality like me, that’s a big admission.

Even though I’ve taken courses, participated in numerous webinars and read countless articles - when it comes to email marketing, as Roseanne Roseannadanna famously said, “It’s always something…”

So I thought, since email is still the #1 way to contact your customers, that I would share with you five of nine somethings I’ve learned about sending emails. If you like these five, you can download all nine at the end of this post.

What gets you to actually open an email from a retailer you subscribe to? I’ve tried to be catchy, funny, both short and long, and you know what? Creating subject lines that gets people to click “open” is harder than it sounds.

That’s why I’ve tried other people’s “proven” subject lines. You know what? The open rates were not much better. In fact, I found out putting the proven word “newsletter” in the subject line of my emails was deadly. Even though people had signed up to receive my newsletter, many still weren’t opening them.

The Mistake: Being generic.

Knowing why someone would open an email from you is critical.

A recent newsletter email went out with the subject line, “Attract more customers to your retail store.” Open rates sky-rocketed.

What I learned: Subject lines done right get opened.

Learn 8 Ways To Attract Customers To Your Store

I tried to keep all my subject lines short, say 50 characters or less, figuring less is more.

The Mistake: Being too short.

Turns out, the better performing emails actually have longer subject lines - like Tweets. This was backed up last week in a special report you can download from Adestra.. They found that a 150 character subject line received a 93% open rate.

What I learned: Subject lines need to tell a longer story to get opened. (Think Fifty Shades of Grey, if you’ve read them.)

I used to send out emails with “Hi,” or “Dear Colleague” in the subject line but they felt like a form letter – nothing special.

The Mistake: Being boring.

I discovered that when I added an auto-text field that inserted the recipient’s first name in the subject line, openings increased. A lot.

What I learned: Personalized subject lines get opened.

4. You Need the Full Code

As I was honing my personalization skills,  cut and pasted the code that would include the subscirbers name {insert first name} from a previous newsletter.

One time, I sent myself the test email which had {insert first name} (notice I had forgotten the second bracket). I proofread the email, but missed that missing bracket, hit the Send button and waited for my reports.

That’s when I received emails from subscribers that said, “Hey Bob, my name is not ‘{insert first name.’” A few people contacted me wondering if I did it purposely to get my readers’ attention.

The Mistake: Not double checking your personalization codes.

When I first started emailing my newsletters, I prided myself on my high open rates. That is, until they dropped. I fretted for awhile over that one until I realized that most email programs’, including Outlook, don’t post an email that contains images as having been read until the reader clicks the “download images” bar. Since my newsletters always included at least one image, I wasn’t getting an accurate open rate.

The Mistake: Metrics have changed.